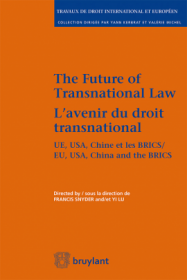 In his famous 1956 Storrs lectures at Yale Law School, Philip Jessup defined ‘transnational law’ as including ‘all law which regulates actions or events that transcend national frontiers’. Since then, however, globalisation, European integration, global legal pluralism, the creation of the World Trade Organization (WTO), and the rise of China and the other BRICS have profoundly altered the legal landscape. What is the future of transnational law? What does ‘transnational law’ mean in an age marked by global legal pluralism and the emergence of new sites of governance?

Is all law today ‘transnational’? How does transnational law relate to regional, national and local cultures and traditions? Is transnational law limited to major players on the international stage, such as the European Union (EU), the United States and China? To what extent does it reflect the rise of the BRICS?

This bilingual volume comprises a selection of the revised versions of papers first presented at the 9th International Workshop for Young Scholars (WISH) / 9e Rencontre Internationale des Jeunes Chercheurs (RIJC). WISH/RIJC is an annual conference which seeks to bring together the most promising young scholars in specific fields of European Union law from universities of the EU Member States, and other countries in Europe, North and South America, the Middle East, Africa or Asia, including the United States, Canada, and China. Its objective is to identify and discuss themes which are likely to be the most significant topics of research in the field of European Union law in the first half of the 21st century. The 9th WISH/RIJC was held at Peking University School of Transnational Law (STL), Peking University Shenzhen Graduate School, China, from 29 November to 1 December 2012. It was the first WISH/RIJC in China. It was organised by the European Law Journal (ELJ), the Centre for Research on Transnational Law (CTL) at Peking University STL and the College of Europe in Bruges, Belgium, in cooperation with the Centre de Recherches Internationales et Communautaires (CERIC), Aix-Marseille Université, France. It discussed approaches to transnational law; transnational law and human rights; legal pluralism and risk regulation: food and environment; public and private actors in transnational regulation; judges, experts and lawyers in the making of transnational law; and regionalism and transnationalism.